Normandy is known for the 4 Cs: cider, calvados, cream and camembert. I think chateaus, cemeteries and conquerer (as in William the Conquerer, Duke of Normandy and King of England) are more Cs the region is famous for, but I will assume the 4Cs are only culinarily speaking.

It’s impossible to fit in all of the historic and culinary treasures of Normandy in three days, but this itinerary will try. I’ll share how you can see Deauville, Honfleur, the top landing day sites, the American Cemetery and Mont Saint Michel over 3 days in Normandy. I’ll also share where to stay, tips for getting around and the best time to visit.

*This post contains affiliate links that help me run this site at no cost to you. Thank you for your support!

Usually, I like to split up my time between two hotels, even on a three night itinerary. Changing hotels isn’t for everyone on a long weekend trip, but I like to pick a spot in town and then also in the countryside to experience different parts of an area.

For the first night of this itinerary, I stayed in Deauville. The seaside resort town was charming, but better suited for a summer stay. So, if you visit in the off season, staying in Honfleur or in a hotel in the countryside might be better choice.

Suggestions in Honfleur or Deauville:

After the first night, I wanted to move towards Bayeux to be more near the landing day beaches. When I started researching where to stay in this area, Chateau la Chenevière immediately stood out to me for its history, luxurious details and prime location. So, you can imagine how excited I was when Chateau la Chenevière agreed to host me.

The chateau is a 5 star property with comfortable beds, traditional decor, cozy sitting rooms and plenty of outdoor space to enjoy in the summer. You’ll also be treated to the most plush towels and deluxe diptyque toiletries (I have a small obsession with French beauty products). As usual, Alfie settled right in.

Not only does the “Small Luxury Property” have a fine dining restaurant, bistro, bar and pool, but it also has its own place in WWII history. The property was the headquarters for senior German officers and the location of telecommunications posts until the night before D-Day. Armand Lapierre destroyed the lines and the Royal Army was able to move in the following day.

We flew into Paris, picked up the rental car and headed straight for Deauville, also known as the Parisian Riviera. Since the 1800s, this seaside resort town has been a popular summer destination for Parisians wanting to spend time at the beach. You’ll also find designer shops, half-timbered villas and upscale restaurants.

I was first introduced to Deauville when I watched the film Coco Avant Chanel (highly recommend). The resort town was a popular vacation spot for Chanel and her lover, Boy Chapel. She would later open her first shop outside of Paris in Deauville and introduce clothing at the new location.

Deauville hosts horse races and the American Film Festival each year. Hence, the names of famous American actors and actresses that are written on the cabana’s railings along the long boardwalk by the beach.

For lunch, have a savory galette and sweet dessert crepe at Chez Nany. They use organic, local ingredients and offer unique combinations like apple and CBD caramel.

On the way to Honfleur, stop by Christian Drouin distillery to try the first two Cs of Normandy. Calvados is an apple brandy, but also the name of the area (the “department”) in the region of Normandy. Stroll through the apple farm and tour the smaller historic outbuildings.

At the end of the self-guided short walk around the property, you can sample the calvados, pommeau (aperitif of cider and calvados), and gin. The visit is free and there’s no need to make a reservation (a welcomed surprise compared to some of my more rigorous itineraries).

At first, I didn’t think we had time for Honfleur and I’m so glad we were able to squeeze it in. I actually visited on the way to the airport on the way out when I realized we had an extra hour. If you have the whole day in the area though, it only makes sense to pair it with Deauville. While they are only a 20 minute drive apart, the two towns felt very different.

Honfleur is an old port town that played an important role in maritime trade as early as the 12th century. Today, restaurants line the port with building facades and I imagine the restaurant terraces fill up with people when the weather is warm.

You can’t miss the Church of Saint Catherine, the oldest and largest wooden church in France. It was built in the 15th century and mirrors elements of shipbuilding. Be sure to see the memorial in the back dedicated to WWI service members that died for France from 1914-1918.

Start the second day with a short one hour drive to Bayeux. Since it was the closest city to the landing beaches, it was the first to be liberated by the Allied Forces on D-Day.

Today, it is home to the famous Bayeux tapestry, a 230 foot long embroidery that documents William the Conquer conquest of England in the 11th century. After visiting the Bayeux Museum, tour the town to see its timber framed architecture specifically the oldest building located here that dates back to the 14th century.

11 euro per person. Open every day, 9am to 6:30pm (March – October) with reduced hours during low season. More information on tickets and opening times.

While the preservation of cloth for centuries is certainly impressive, I was really blown away by the Bayeux Cathedral. The cathedral was consecrated in 1077 in the presence of William the Conquer, whose half brother was the bishop, Odo of Bayeux. Don’t miss the small side chapel dedicated to peace and to the service members who died in WWII.

For lunch, enjoy another culinary treat popular in the region. Although galettes originate in Brittany, crêperies serving the savory dish made with buckwheat can be found throughout Normandy. I chose le moulin de la galette and it was already packed when we arrived promptly when it opened at noon. While it in no way held up to the standard of galettes at my favorite place in Paris or the one I had on a trip to Biarritz, it was still tasty with a nice outdoor patio along the river.

Visiting the American Military Cemetery has been on my bucket list for many years. The site is the final resting place of 9,386 service members, most of whom lost their lives on D-Day or in the operations to follow. To call the experience “moving” is an understatement and words certainly can’t do it justice.

The cemetery is located a few minutes from Omaha beach by car. Omaha was code word for one of the five beaches on the coastline and crucial to the success of the invasion.

Between Omaha and Gold beaches, you can visit the Longues-sur-Mer battery. The German artillery battery is the only one in Normandy to still have all its guns and surprisingly you can actually walk through the casemates.

After a full day of sightseeing, relax back at the chateau. Enjoy a drink at their bar followed by dinner at the fine dining option Le Botaniste or Le Petit Jardin bistro by the pool.

While you could easily spend another day touring museums and visiting other landing beaches, making the hour and half drive down to Mont-Saint-Michel is well worth it. Before hitting the road, have a thoughtful breakfast buffet featuring local producers and the finest Mariage Frères tea. The honey is actually produced right on site.

Mont Saint Michel has been a destination for pilgrims since 708 when the Bishop of Avranches built a sanctuary on the island honoring the Archangel. Today, the UNESCO world heritage site the second most visited site in France.

You can’t visit Mont Saint Michel without going to the abbey that dates back to the 10th century. After arriving by shuttle, follow the crowd up through the narrow alley lined with knick knack shops and restaurants (mostly quick bite/take away). A walk to the top will take you 5-10 minutes, depending on how many stops you make to take a breathe or peak in aforementioned trinket shop.

11 euros entry: Book your ticket to the abbey ahead of time and skip the line.

A visit to the abbey is a labyrinth of staircases guiding you through chapels, crypts and great halls. From a prison in the early 19th century and then occupied by Germans during WWII, the abbey has a fascinating history.

If you are interested in having “the most famous omelette in the world,” La Mère Poulard is the restaurant that’s been serving omelettes since the late 1800s to visiting pilgrims. Hitting on your bill at at 34 euros (about $37 USD), it is also probably one of the most expensive omelettes in the world.

I’m all for an occasional splurge on vacation, but this was a pass for me considering the mediocre reviews on Google.

To access Mont Saint Michel, you’ll have to park at the visitor’s center and then take a shuttle or walk. More information about parking and timetables.

Tips for Getting Around Normandy

If you are interested in visiting just one or two of these destinations in Normandy, it is possible to do it as a day trip or via public transportation from Paris. From the Saint Lazare train station in Paris, it is an easy and direct 2 and half hour train ride to Deauville.

However, if you really want to go to multiple places and WWII sites in Normandy, I would recommend renting a car. I got a good rate on the rental car itself, but expect gas to be more than it is in the United States.

When to Visit Normandy

Admittedly, mid-March was not the most ideal time to visit Normandy. We got very lucky with hardly any rain despite a forecast to the contrary. I would recommend April at the earliest to still take advantage of less crowds and discounts at hotels. Undeniably the weather is better from May to September though.

Most of the chateau and estates are closed until June or July, (like this one with the highest roof in all of France). So, if visiting those sites are on your to do list, I would plan a summer trip and research opening times.

–5 Things you Can’t Miss in Biarritz 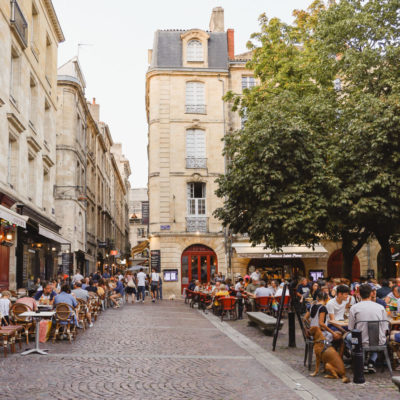 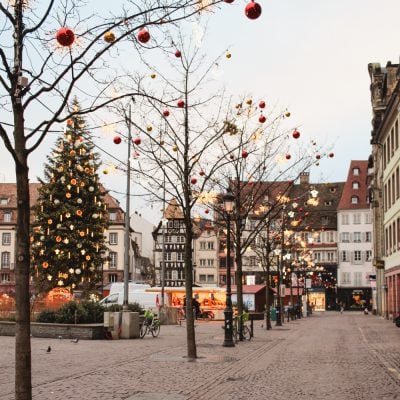