Cádiz is one of the oldest continuously inhabited cities in Europe with ancient artifacts in the museum and a Roman theatre to prove it. While Cádiz is a smaller city, it is filled with remarkable history, preserved castles, charming plazas, beautiful parks and memorable restaurants. With the Old Town spanning a little over a mile, you can walk from one end to the other, something I quite enjoy doing on the weekends. Most of the best things to do in Cádiz can be done in just one day and best of all, are free to enjoy.

*This post contains affiliate links which help support this site at no cost to you. Thank you!*

How to get to Cádiz

Cádiz is served by two airports, Seville and Jerez (30 minutes by car). Seville is the largest nearby international airport and is also a nice addition if you are planning a trip to Andalusia. The train from Seville to Cádiz is under 2 hours.

Things to do in Cádiz

Construction of the Cádiz Cathedral started in 1722 and lasted over 100 years with the design getting altered as time went on. The grand cathedral with 16 smaller chapels inside was built during a prosperous time when Cádiz was the center of trade to the Americas. As if the facade isn’t beautiful enough, the view of the cathedral’s dome from the promenade on the waterfront is what makes the skyline unmistakeable.

To the left of the cathedral on the side of the plaza, don’t overlook the older Santiago Church built in 1635.

I stopped in my tracks when I came around the corner and saw this stunning building. It has been many years since I went to Morocco, but the architecture instantly reminded me of it. The Gran Teatro Falla was rebuilt in Moorish revival style during the late 19th century after a fire devastated the original structure.

Unfortunately, I’ve yet to attend an event here due to current restrictions, but I did get a quick peak of the inside when the back door was open. It’s grandness looks similar to the San Carlo Theatre in Naples, Italy.

Parque Genovés is a historical park at the water’s edge complete with orange trees, an outdoor cafe, a large waterfall cave structure (a must for kids) and a promenade lined with trees pruned in a style reminiscent of Edward Scissorhands. Admittedly, I’m sure there is a technical name.

Bonus park: Follow the main walkway around the corner a few hundred meters to see another park near the Marquis de Comillas monument. Fellow tile lovers won’t want to miss this park.

Eat at the Mercado

With over 100 stalls, the Mercado is where locals do their shopping for cheese, vegetables, meats and fish. Although I go there for the outer ring of stalls that serve a variety of tapas and local specialties like fried fish and sherry. You can find me at the corner stall serving paella for a few euro.

The nearby La Poeme and Churrería la Guapa are also highly recommend by my Spanish teacher at the University of Cádiz.

If you park at the train station (recommended), Plaza de San Juan de Dios will be the first plaza that welcomes you to Cádiz. It is home to the city hall (ayuntamiento), a number of cafes with outdoor seating, and a yellow building with white covered balconies that always catches my eye.

Head to San Antonio Plaza to see locals relaxing and having a drink in one of the outdoor cafes spilling out onto the square. You also can’t miss the San Antonio Church. Check out this two-bedroom apartment rental if you want an accommodation with a view of the church and plaza.

Plaza de las Flores is another favorite with several flower stalls, as the name would suggest. If the post office at the end of the plaza is open, be sure to peak in for a look at the staircase with rose gold tiles.

Go to the Cádiz Museum

The Cádiz Museum anchors Plaza Mina, a nice square with a massive ficus tree worthy of seeing by itself (there are more of these trees over by La Caleta beach too). The museum boasts an archaeological section with Roman statues, an impressive collection of ancient artifacts and fine art paintings. The ancient jewelry and vases on display are particularly beautiful and had me wishing there was a gift shop with replicas.

Both of the castles in Cádiz look like they could have been a Game of Thrones film set. Castillo de Santa Catalina is the 16th century castle in the shape of a star with a small chapel. Within the castle is also an exhibition on the accidental military explosion of 1947 leaving 150 dead and thousands injured. Free entry.

Walk out on to the long path that leads to Castillo de San Sebastian on a small island. The first structure on the island was a chapel built in the 15th century by Venetians recovering from the plague, but the castle itself wasn’t built until almost 250 years later.

Go for a swim at La Caleta Beach

Sandwiched between the two castles, you’ll find La Caleta Beach. This beach was actually where the Havana scenes in the James Bond film Die Another Day were filmed. While the bar was sadly just a film set, there is another small bar next to the Castillo de Santa Catalina that is the perfect place to stop for a beer.

This 1st century Roman theatre was discovered in 1980 after a fire. This is one of the more interesting theaters because it is only partially excavated and modern day buildings sit right on top of the sides. Can you imagine living in one of those buildings and suddenly getting a front row view of an ancient Roman theatre? Talk about an unexpected upgrade.

Check the website for opening hours and to make a reservation. Free entry.

8 Villas in Tuscany with a Pool
Travel Guide to Tarifa, Spain 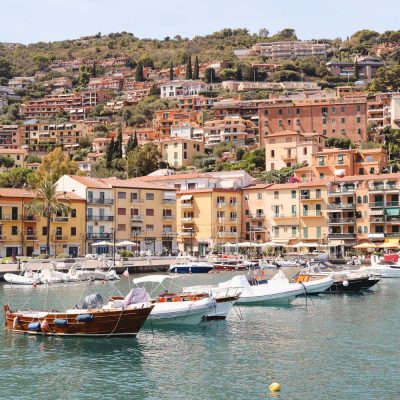